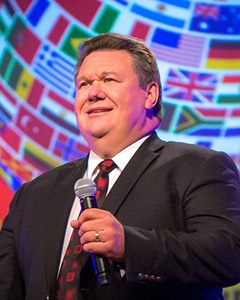 After 30 years in public education in Alabama, Dr. Barry Carroll retired as Superintendent of Education 2011.  Dr. Carroll’s career in education consisted of serving as a teacher in the Tuscaloosa (Alabama) City Schools; Assistant Principal and Coordinator of Athletics for Central High School in Tuscaloosa; Principal of Eastwood Middle School in Tuscaloosa; Principal of Ed White Middle School in Huntsville, Alabama; Director of Secondary Education and Professional Development in the Huntsville City Schools; and Superintendent of Education for ten years in the Limestone County Schools in Athens, Alabama.  Dr. Carroll has also served as an adjunct professor at Samford University in Birmingham, Alabama where he has taught Instructional and Educational Leadership and Issues in School Finance.

Dr. Carroll has been recognized and received many awards for his work in education.  Some of the most notable awards include the following:  In 2008, he received the Superintendent Spotlight Award presented by Athens State University (ASU) in recognition for Commitment to Excellence in “Building Success Stories” for ASU students.  In 2006, Dr. Carroll received the Outstanding Contribution to Education Award presented by the Capstone College of Education Society for The University of Alabama. In 2005, he was named Superintendent of the Year by the Alabama School Communicators Association.  In 2002, Dr. Carroll received the Distinguished Community Service Award presented by the Community Action Agency for Huntsville, Madison and Limestone Counties.  In 2001, Carroll was inducted into the Alabama A&M University Athletic Hall of Fame for Football.  While serving as a principal, Dr. Carroll was the recipient of the 1996 State of Alabama PTA Most Outstanding Secondary Principal Award.  Dr. Carroll also received the 1996 and 1997 Huntsville City Schools Most Outstanding Principal Award.  Dr. Carroll was also honored when he was nominated and selected for the National Congress of Parents and Teachers (PTA) Honorary Life Membership (National PTA’s highest honor) and the Alabama PTA Certificate of Honorary Life Membership.

Dr. Carroll has been a member of many associations and organizations including the American Association of School Administrators (AASA); the Horace Mann League; Council for Leaders in Alabama Schools (CLAS); School Superintendents of Alabama (SSA); the Association for Supervision and Curriculum Development (ASCD), just to name a few.

Dr. Carroll has made many presentations and has been published in newspapers and journals. Some of the presentations were for organizations including the National Conference on Alternatives to Expulsion, Suspension and Dropouts; National African American Males Conference; School Superintendents of Alabama Conferences regarding decreasing the dropout rate; Keynote speaker for the Alabama A&M University Founders Day Ceremony; Alabama Superintendents Academy; and presentations for the Alabama State Department of Education.

Dr. Carroll worked for two technology companies in Atlanta from 2011-2017.  He worked for Promethean from 2011-2014 and Classworks (Curriculum Advantage) from 2014-2017.  In 2017, Dr. Carroll launched his own company called Capacity Educational Services, a consulting company focusing on leadership development for school districts, businesses, churches and other organizations.

At Capacity Educational Services (CES), we believe leadership is the key to success and happiness in all phases of life.  The leadership of any organization has a profound impact on the members of that organization.

We believe educating and training leaders with the skills and tools required to be successful is paramount.  Our mission is to produce leaders who truly understand leadership and possess the leadership skills to move any organization toward explosive growth and success.

To partner with school districts and other organizations across the southeast and nation to provide world class leadership development training to inspire leaders and aspiring leaders to dream more, think more, learn more, do more and take more action to positively impact those who follow.

The CES Objectives include helping individuals, teams and organizations:

As the founder of Capacity Educational Services states, “Education is the thread that binds our country together.  If that thread ever breaks, our country will unravel and fail.”  The key to survival and success is education.  The Key to education is leadership.  We believe there is no greater need in our country than to develop leaders who possess vision, inspiration, and motivation to develop future generations of leaders for education institutions, churches, businesses and other vital organizations.