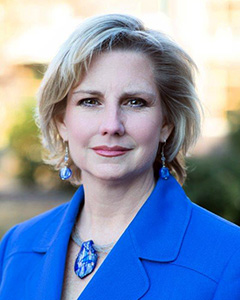 In addition to her work on several professional committees, Ms. Colburn is an active community leader who currently serves with organizations such as the Marietta Mentoring for Leadership organization, the Georgia Council on Substance Abuse, and liveSAFE Resources. She is a 2006 Leadership Cobb graduate and a 2014 member of the Cobb Chamber's Honorary Commanders organization. Ms. Colburn works actively with the Marietta Schools Foundation, as well as numerous government and non-profit agencies, public safety organizations, and community groups to improve the quality of life for Marietta's teens.

Among other honors, Mrs. Colburn has been recognized as Marietta Citizen of the Year, Marietta City Schools Employee of the Year, one of Cobb County's Top Ten "Power Women," and Northwest Georgia’s Woman of the Year. Ms. Colburn and her husband, Doug, live in Georgia and they have two sons.    Their older son, John, is a minister in Alabama, and their younger son, Phillip, is a member of the United States Military.