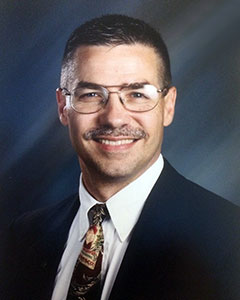 Dr. Espy began his career as a math teacher and coach at Central High School in 1987.  He coached the 1993 state championship in boys’ soccer, and later served as athletic director for the Tuscaloosa City Schools, as well as Scottsboro City Schools.  He completed his doctorate in Educational Leadership at the University of Alabama in 1998.

He served for 7 years as principal at Hubbertville High School before moving to Demopolis to serve as high school principal in 2005.  In 2008, Demopolis High School was one of 56 public high schools nationwide recognized by the U.S. Department of Education as a “National Blue Ribbon School”, for significant gains in student achievement.  Dr. Espy was honored by the Demopolis Area Chamber of Commerce for his leadership in education, being named “Citizen of the Year” in February 2009.  He returned to Tuscaloosa in 2009 to serve as principal of Northridge High School, and was recognized as “Administrator of the Year” by the Alabama Scholastic Press Association in February 2013.  He went on to serve as head of school at Tuscaloosa Academy until his retirement in 2017.

Dr. Espy has completed over 100 marathons and ultra-marathons, including 100 mile trail races in Texas, North Carolina, Alabama, Arkansas, Ohio.  He also is proficient in piano and banjo. An Eagle Scout as a member of Troop 43 in Tuscaloosa, he served as assistant scoutmaster and district commissioner with the Boy Scouts of America. He is an ordained Baptist deacon.