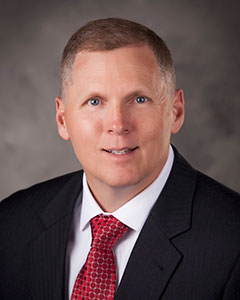 Dr. Jim Sutfin stepped into the role of superintendent for Millard Public Schools in fall of 2014. Currently he serves as the leader of a district of 35 schools with more nearly 24,000 students and more than 3,000 teachers and staff members. Previously he served as the Assistant Superintendent of Human Resources for the district. Along with his time in the central office, he has also filled the roles of principal, assistant principal, science department head and science teacher. He began his teaching career in Bellevue in 1989 and has been with Millard since 1995.

In 2016 he was named a Superintendent to Watch by the National School Public Relations Association.

Dr. Sutfin has made many presentations to educational, civic and business groups.  He is active in many community organization and serves on a number of boards including the Omaha Chamber of Commerce, MOEC Executive Task Force, Foundation for Millard Public Schools and the GOALS Committee.

Dr. Sutfin leadership has focused on finding wide ranging solutions to significant school and community challenges. He has led the successful development and implementation of the strategic plan. He led a successful tax levy override campaign in the fall of 2017 with nearly 63% voter approval. Despite significant budget constraints, Dr. Sutfin led the successful implementation of a 1:1 learning initiative that spans grades 6-12.  Dr. Sutfin implemented the first Early College Program in Nebraska where high school students can earn their high school diploma and associate of arts degree simultaneously.

Dr. Sutfin has served as a consultant to other districts in the areas of strategic planning,  recruitment and hiring practices, leadership development and succession planning, social media/communication, digital learning, and crisis management.