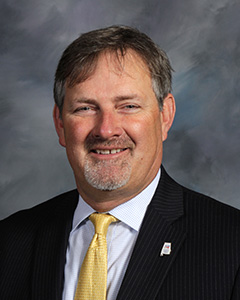 Executive Director of the Council for Leaders in Alabama Schools

Dr. Vic Wilson is the Executive Director of the Council for Leaders in Alabama Schools.  Prior to joining CLAS July 2017, he was the Superintendent of Hartselle City Schools. During Wilson’s 24 years of service in the field of education, he has worked with professionals from Pre–K through graduate school. Prior to his selection as superintendent of Hartselle City Schools, Wilson performed numerous roles including principal, assistant principal, teacher and coach.

Wilson has received leadership awards from the Alabama Music Educators Association and the University of Montevallo. Throughout Wilson’s 18-year tenure in public education administration, he has been active on the CLAS Board of Directors. In 2014, he led the Alabama Association of Secondary School Principals as their association president. He was selected as Alabama’s 2017 Superintendent of the Year by the School Superintendents of Alabama.